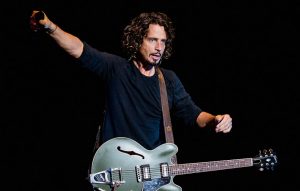 Chris Cornell‘s bands Soundgarden and Audioslave have blacked out their social media accounts in tribute to the late frontman.

Grunge legend Cornell was found dead in his hotel room on May 17 after playing a gig with Soundgarden in Detroit. He was 52. While Cornell’s death is being treated as a suicide, his family have claimed that prescription drugs may have contributed towards him taking his own life.

As Stereogum points out, Soundgarden have uploaded a simple black image as their profile picture and cover photo on Facebook, also doing the same for their Twitter account. Audioslave’s Facebook page has also been blacked out. See beneath.

It was recently reported that Soundgarden were working on a new album prior to Cornell’s death.

Meanwhile, this week has seen Cornell’s wife Vicky pen an emotional open letter, referring to her late husband as “my sweet Christopher” and describing the singer as “the best father, husband and son-in-law”.

She continued to write: “I’m broken, but I will stand up for you and I will take care of our beautiful babies. I will think of you every minute of every day and I will fight for you. You were right when you said we are soulmates. It has been said that paths that have crossed will cross again, and I know that you will come find me, and I will be here waiting.”

The post Soundgarden and Audioslave black out social media accounts in tribute to Chris Cornell appeared first on NME.