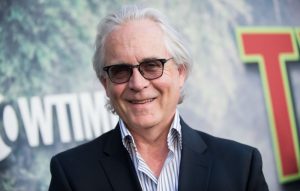 The cult show, which Frost created with David Lynch, returns to the small screen tonight (May 21) after a 26-year absence

Twin Peaks co-creator Mark Frost has hinted at new details about the show’s imminent return, revealing that a “liberating amount of freedom” was permitted in producing the long-awaited third season.

Frost and co-creator David Lynch’s show returns later tonight (May 21) for the new season, marking its return to the small screen after a 26-year absence. The first two episodes of Twin Peaks‘ third season will be broadcast at the same time in the US and the UK – airing at 9pm on Showtime in the US and at 2am in the UK on Sky Atlantic.

Speaking ahead of the return of Twin Peaks, Frost voiced his relief at the show not being at the mercy of network censors this time round.

“I would say we had a liberating amount of freedom,” he told Entertainment Weekly. “And we took full advantage of it, from start to finish. It was a way to deal with things that we didn’t have to turn into a euphemism or an innuendo. We could pretty much tell it like it is and that was very refreshing. And I think it will show up on screen.”

Showtime CEO David Nevins added more detail on the tone of season three, confirming that: “There’s darkness and there’s scariness, but a lot less cursing and probably somewhat less nudity than most of our other programming. Definitely a lot less cursing.”